Many people discover the different types of library spaces when looking for a book or somewhere in their community to hold a meeting. This is one reason why libraries continue to thrive in the Internet era. Even when people can find a lot of information and entertainment online the library as a place is still a draw and provides internet access.

Public libraries in our country embrace the idea that library spaces and content belong to the public. Of course, because of their popularity, libraries’ designated meeting spaces must be reserved. However, libraries themselves welcome everyone.

I will challenge you to reflect on the different ways our public libraries foster community-building through a combination of the facilities and services they offer and the extraordinary mix of people who frequent them.

What defines a Library “Community”?

What are 21st-century libraries meant for, if not to address the unique needs of the people and groups they serve? Today, books on paper share the stage with other library attractions, including hobby groups, speeches and demonstrations, meeting rooms, e-books and audiobooks for flexible reading, and lots of activities for kids and teens. 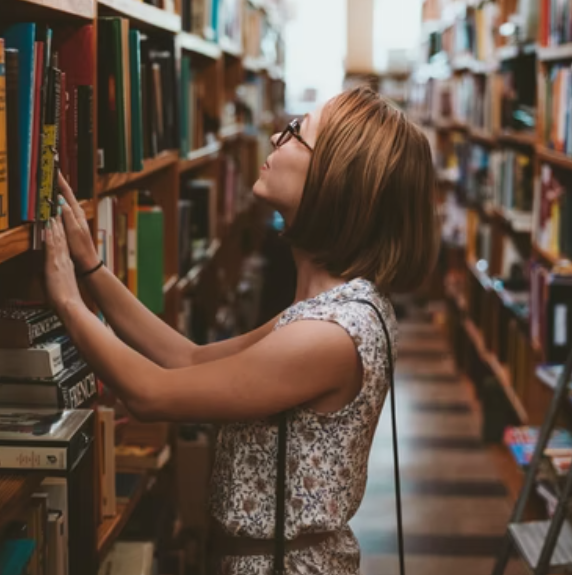 In today’s smaller libraries, you can spot communities in formation. At the two-story library in my suburban town, you see high schoolers sprawled across the soft furniture in a room just for teens, chatting, or working at the computers. This space is theirs, besides an occasional check-in by staff. Adults and younger kids usually stay out of the teen area. We might peek inside out of curiosity but seldom go in.

Often, we adults are headed for a reserved conference room, anyway. There, we’ll meet neighbors and strangers so we can plan fundraising events for pet adoption groups, engage in a book discussion, or study together for classes we might be taking. Larger rooms downstairs accommodate guest speakers, awards ceremonies, and other events. One room even has a kitchen.

This is some of what goes on in suburban libraries throughout the country. Library visitors might not know anyone when they first visit (as once was the case for me), but it's the library. It's a place where people generally treat you well and are helpful. That's the ethos.

Huge downtown libraries are similar to suburban libraries,  yet have their differences. The library where I work takes up two buildings, one with five stories. Based on an American Library Association (ALA) article, I would say it's big enough to house layers of interacting communities. I believe this epitomizes how people today make the most of library spaces.

When an institution like a public library is large enough, you might see it as a microcosm of or prototype for an ideal society. For instance, library staff treat homeless people and those with mental or emotional disabilities with dignity and respect. The library is everyone’s space, at least while it’s open. After that, of course, everyone returns to the places where they sleep.

Making the Most of the Library Space

The longstanding expression, “If you build it, they will come,” applies to no edifice more than a public library. Imagine a sparkling new building, typically near the center of a town or city. It draws everyone’s attention, so they want to see what’s inside. Same stacks. Same circulation desk. AND all these terrific new spaces!

Also, did you know that many libraries have been checking out “non-traditional” items for some time now? Here’s a representative list of things people are checking out from the library:

I should point out that this list combines what I’ve read online and discovered in my local libraries. I’ve included it because it shows in a humorous way the lengths public libraries go to when ascertaining and addressing the needs of their communities. And, yes, the returnable items all have due dates.

Libraries have come a long way!

Andrew Carnegie was a robber baron and library benefactor par excellence. His dedication to building libraries was pioneering. Having come to the U.S. as a poor immigrant, he amassed a fortune in the steel industry.

“Coming as a dirt poor kid from Scotland to the U.S., by the 1880s he'd built an empire in steel — and then gave it all away … to fund a system of 1,689 public libraries across the country.” Susan Stamberg, for NPR

While Carnegie built libraries for the public, he persistently refused to raise wages for his steelworkers, claiming they would squander the money on temporary luxuries. Yet, he was steadfast in his resolve. And in the famous Homestead Steel Strike of 1892—with workers fighting for better pay and working conditions—he brutalized those on the picket line.

Yet, he kept building libraries, ostensibly for his workers and others like them. Near the end of his life, he gave $350 million more to continue building libraries and other public institutions, many of which sustain community knowledge and enlightenment to this day.

However, Carnegie missed libraries' most important role: building community among people from all walks of life. Likewise, many of us today tend to avoid those facing struggles—as if the condition were contagious. But when we share moments with these folks, as library workers so often do, we're changed by the experience.

Wouldn’t it be amazing to see Carnegie’s reaction to what’s happened to “his” libraries since his death just over a century ago?

What will be the future of library spaces continuing into the 21st century? Personally, I  hope that public libraries (even public university libraries) will work with higher education to grant experiential learning credits to the many adults who spend their days in the library. They read college-level subject matter, use a wide range of resources and technologies, as well as work with library staff to solve complex problems in their lives.

Some people visit the library just for enjoyment. Others visit to be educated. Who would deny them either choice?

What do you think will be next for public libraries and their remarkable spaces?