Results of FOIA Search in Lafayette

Campaigners on the ground in Lafayette have continued to make Freedom Of Information Act Requests of the Lafayette Parish Council. What follows below is a brief synopsis of the latest findings.

Campaigners on the ground in Lafayette have continued to make Freedom Of Information Act Requests of the Lafayette Parish Council. What follows below is a brief synopsis of the latest findings.

On February 3, 2021 Councilman Josh Carlson exchanged text messages with Board member Landon Boudreaux concerning the next appointment to fill an open seat on the Board.

The texts pictured below seem to show that three councilmen Josh Carlson, John Guilbeau, and Bryan Tabor had already agreed to all vote for the same candidate as Carlson’s text with Boudreaux also shows.

Since there are five representatives on the Lafayette Parish Council, a predetermined vote of three members constitutes a walking quorum and the majority vote.

This predetermined decision means that the council likely deprived citizens of their rights, and probably violated the law in order to appoint their own political operative to the library board.

It appears as though Carlson, Guilbeau, and Tabor were not acting in good faith as parish councilmen; during the council meeting on February 9th that should have had a fair vote for the next board appointment, there were three citizens who spoke in-person and another twenty who called the council prior to the start of the meeting to voice opposition for Robert Judge. We now know the decision was almost definitely predetermined for Carlson, Guilbeau, and Tabor; there was no listening to public opinion because they had decided how they would all vote to control the outcome of the February 9, 2021 public meeting before Carlson sent a text confirming those votes on February 3rd, 2021.

The text correspondence between Josh Carlson and Landon Boudreaux that follows was obtained on March 11, 2021 in the fulfillment of a public records request submitted to the Lafayette Public Library Board of Control on March 1, 2021. The request included all correspondence between Josh Carlson and Landon Boudreaux on or between the dates of February 3, 2021 and February 12, 2021 including anything relating to the Lafayette Parish Library Board of Control.

February 3rd is six days before the Parish Council meeting is scheduled to vote on and appoint a library board member.

Landon Boudreaux requests the list of board candidates from Josh Carlson to which Josh Carlson replies with a list of seven applicants’ names. 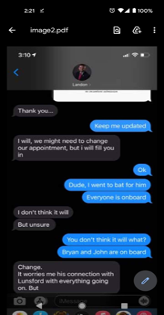 Landon Boudreaux’s text states “we might need to change our appointment, but I will fill you in” indicates the decision has already been made prior to this text.

“I went to bat for him” and “Everyone is onboard” stated by Josh Carlson indicates the other council members have already agreed to vote for his choice of candidates.

Josh Carlson further clarifies “Bryan and John are on board” indicating he has the agreement of two of his fellow parish councilmen Bryan Tabor and John Guilbeau.

Landon Boudreaux says “It worries me his connection with Lunsford” seems to refer to the fact that Robert Judge, who was appointed by council on February 9th 2021, is a known associate of Michael Lunsford, a local political operative involved in killing library millages in recent years.

Landon Boudreaux further notes that “the only other option is Maturin” and Josh Carlson agrees “correct” making it very clear that no candidate other than Shelly Maturin (who did not even bother to submit a resume as required by the application process) in the list of seven applicants would really receive any consideration from this parish council.

Please contact the District Attorney at (337) 232-5170 and ask that they investigate these elected officials who appear to have acted in blatant violation of the open meetings law.

Donate today to help us support libraries like Lafayette!
Every $10 we raise helps us reach 1,000 more people like you to take action for libraries!

The DA's office is in a unique position to tell these Lafayette Parish Councilmen actions like these will not be tolerated. Councilmen Josh Carlson, John Guilbeau, and Bryan Tabor should not be colluding to appoint library board members solely on partisan reasons; to have a healthy library system we must have board members who care about our community and elected officials who act in good faith to appoint those people.

- This message sent on behalf of the supporters of Lafayette Library.

EveryLibrary is a registered 501(c)4 organization (FEIN 46-1534149). We invite you to check up on us before donating by finding out more about us on Guidestar, the most trusted guide to non-profits on the Internet.