During her debate with Gretchen Whitmer, Tudor Dixon accused Michigan schools of distributing "pornographic" books such as those about divorce.

Nearly half of marriages in the United States end in divorce, but Michigan candidate for governor, Tudor Dixon, doesn't want your children to learn about it.

This is why we're worried about so many book banning candidates running for office across the country.

A Democratic PAC called American Bridge 21st Century dug up an audio clip demonstrating how problematically expansive Dixon's views are when it comes to controlling what your family is allowed to read. 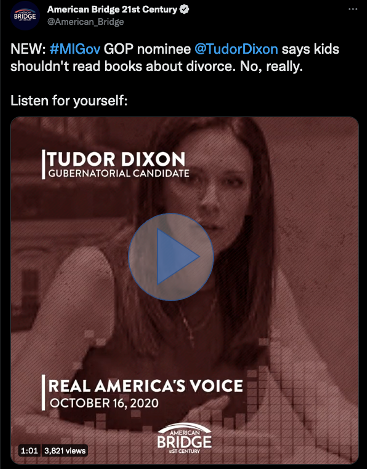 In the clip she proposes that books featuring divorced characters are just too spicy for most kids.

We need people like you to help us fight back against these kinds of attacks that will only get worse as more book banners get elected.

If you start a donation of just $5 a month to fight against book bans, we can put it to work right away!

If Dixon wants to distance her own daughter from the reality of divorce, that is her choice.

But she doesn't have the right to regulate the books that you and your family read.

Please help us fight back by signing and sharing the petition against book bans on Facebook and Twitter!